Lately so much has happened. And thankfully only good things. I am so happy! I had so much fun at Practice Night. It was just so amazing to perform to all these people. I felt so good. Dancing is my real passion!
After the two concerts i went to J's place. It was my first time to sleep over there. I really liked it! Next morning we went to Mai Running Day. It was such a wonderful weather! J decided to run with me! That made the day even more special to me! That was Saturday. On Sunday we were just in Kohila at my place. We watched tv, take a walk and J cooked two dishes: for himself and for me :) And it was delicious. I got brown rice with vegetables. It was my own choice. A good one!
Well, i had an exam on Monday. It went pretty okay. After the exam i went to the movies with my friends. We watched "Water for Elephants". It was so sad and dramatic movie, but it had an happy ending. After the movies me and Jaana shopped a bit and then i met J. We went to the movies also. We watched "Pirates of the Caribbean 4" in A Le Coq suite. Wow! Neither of us had been there before. But since the movie was only shown at that suite at that time, we decided to check this suite out. It was nice. Soft and comfy couches and mini bar and stuff like that. But i must say it's not worth of the extra pay. It was about 3 times more expensive. But at least know we know how that suite looks like. And well, i still very enjoyed it!
After the movies we bought strawberry and wanted to catch a train, but we were running late. So we decided to stay over at J's place. But before we headed there we had a dinner at St. Patrick's. What a nice evening, isn't it? We arrived at J's about 11pm. And today the wake up was at 6am. J had to go to Finland. I took a train back home. Luckily he's coming back soon. He'll arrive to Tallinn any minute actually. And if he can make it, he'll catch the next train and come here :) Nice! mmm, i am hungry. I can smell something good downstairs. My mom is making that dish that Jamie Oliver did on his show. It's called asparagus and potatoes tart. Hopefully it's the same tasty as it smells! 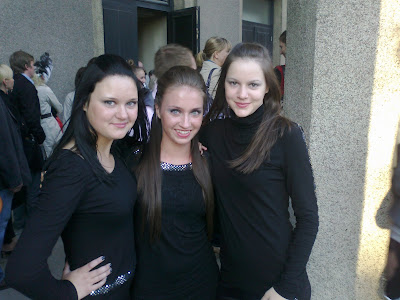 After the first concert we took this photo outside

And now a little video of our performance. It's not a very good one, but better than nothing. Can you find me? :)