in Tallinn with J

I was sunbathing in my garden when J called me. He told he's gonna run late. He had some kind of work project to do. So, he told he's coming home by last train. That made me sad a bit because i hoped to see him sooner. Anyway, 18:30pm he called me and asked what i was doing. And came out he was on the train station. He told he was kidding before. He was about to come to Kohila. But then he realized that his brother isn't at home so he asked if i want to go to his place instead. And sure i was okay with the plan changes. I thought next train to Tallinn is at 7:20pm. So i quickly made myself ready and i was already walking toward the train station when i decided to check the train's timetable. And STUPID me! There wasn't going any train at 7.20pm:/ I called J and told him the bad news. He said it was okay as long as we still see. He made me feel so good! Anyway, i took the next train, at 8:16pm (actually train was 15 minutes late:S). But when i arrived to Tallinn J was waiting for me. We wanted to have a dinner but ended up going to the movies to watch Beatly and eatcing candies from Candy King and drinking sooooo delicious smoothie (mine was mix of ice-cream, strawberries and banana). After the movie we went to J's place. Next morning I went to bed, i went to the libarary to get some books i needed, then i printed my essay out and headed to Viimsi. O'boy how hot it was in the bus. I came out of the bus few stops before mine. I preferred walking. At least i felt a bit of wind and got to breathe normally (in the was there was lack of oxygen). Anywho, i walked to my granny's and went to the beach with my sis. It was such a hot weather yesterday so i totally enjoyed my this summer's first time at the beach! I even went to the sea (though it's obviously too early for that). Water was ice cold, but such a cooling. We were laying at beach about 2,5 hours. When we headed back to granny's, J called me and told he's going for a lunch and wanted me to join him. So i did. I didn't want to eat though because i had promised my granny that im going to eat at her place after i'm back from the beach. But in the end J still made me eat a little pie and ice-cream(that was much of my own choice to be honest!Lol). Well, back at granny's i was there a bit and then i walked my sis to the bus. She went to the center of the city to a dance practice(jazz and bailatino). I walked back to my granny's. Then i finally had lunch(i was so full actually but i only ate because i had promised. And she cooked fish especially for me because i don't eat meat. Yeah, she's that nice!). Then i hunged around at her place until J called me at 5:45pm. He was finishing up his work for that day so i started walking to the bus station to meet him there. We took a bus to the city center. There we met his brother, and after a while with him, me and J went to the shopping center. J needed new shorts. We ended up getting him now shorts, two t-shirts, and new bikinis for me! I absolutely love them. We planned to go swimming to the Kalev SPA. But first we had dinner at Grill House. I ate very very delicious pasta with salmon. It really was super yummie! 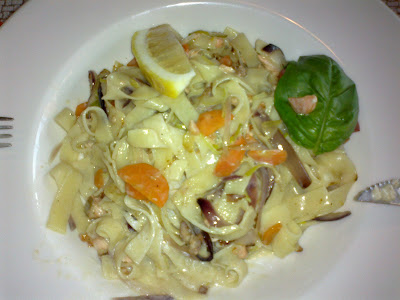 After dinner we bought blueberries and bottles of water from the food shop and headed to the SPA. But it was already 8:30pm and unfortunately they ended selling tickets at 8pm :( We were both very disappointed. But we couldn't do anything about it. So, we went to J's place, watched American's Next Top Models and ate blueberries :D They were absolutely YUMMMMIIIEEE!!! I love blueberries! So, we also watched a movie I Am Number 4. But i fell asleep sometime in between the movie :S But i woke up just when the movie ended. Then we went to sleep (i would say we went to bed, but we already were in the bed.Lol).
And today morning J went to work, i slept 10 minutes longer and then woke up, got ready and catched train back to Kohila.

When i was in the middle of blogging, J talked to me on skype and asked if i want to go to Tallinn in the evening after my hairdresser so we can go swimming. Of courseee! Yay! So, now i am back from the hairdresser and i am about to leave to the railway station in 20 minutes. J will be waiting me in Tallinn and we will go swimming. I can wear my new bikinis! O'boy i am so excited! We had so much time last time at Kalev SPA! I am so looking forward to today's adventures, too.
As you can see, J treats me like a princess. But more than that, he makes me feel happy. I just love being around him, no matter what we are doing. I love him so much!!! <3 And i never take him or anything he does for me for granted.
Posted by Sandra at 5:47 AM