I'm in Finland. Jay and I arrived here yesterday. I didn't have time to blog these few days because I just didn't want to spend so much time on my laptop.
Jay and I went shopping on Friday evening. First we went out to have sushi for dinner. I wanted to give it another chance, but nope - I still don't like sushi and will probably never like it. But it's okay. After sushi I wanted somethin good because I was still hungry (that's because I didn't like and couldn't eat sushi!). So, I had frozen yogurt with hot blueberry soup for desert! It was delicious!!!! 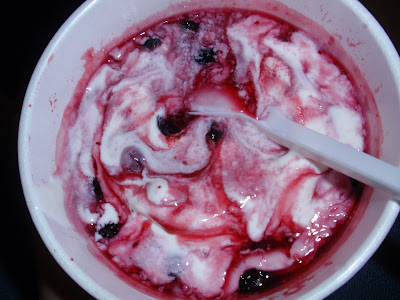 I should have taken a photo before I started eating it, but I just couln't wait. So, here's a photo of half eaten frozen yogort.
Later we looked around shoppin center. I found a really nice dress that I liked, but they didn't have my size :(
Jay and I went to Lindex and Jay bought me my Christmas present from that shop. I asked him not to give it to me until Christmas Eve. So I must wait!
We also went for a walk in the Old Town. It was so pretty in Christmas lights! I also took few photos. 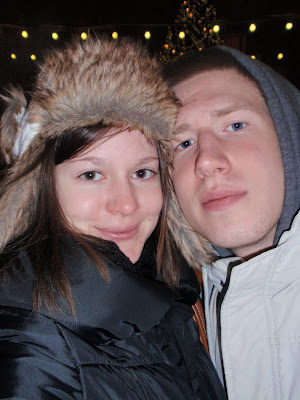 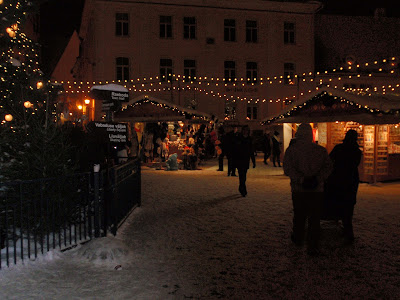 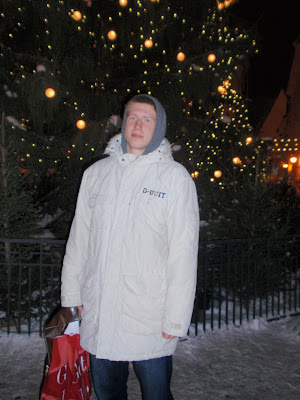 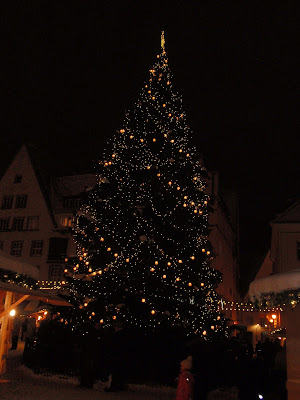 We went to a another shipping center also and bought some more Christmas ornaments and lights for our Christmas tree! When we arrived home, we decorated our tree and it looked so pretty! We also cut the top of the tree, so the tree is a bit shorter now :P We are in Finland now and no-one is watering our Christmas tree. I feel so bad about it. We should have taken an artificial tree that needs no watering. If next year we are also a lot away from home during December and January, then we won't have a real Christmas tree. But I definitely want to find as real looking artificial tree as possible!!!﻿ 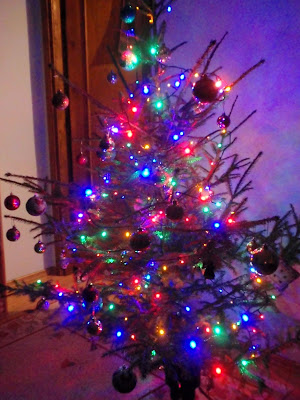 
When we went to the ship yesterday morning to go to Finland then we both felt so sick. We didn't get much sleep the night before and I seriously felt so weak. Jay decided to take a cabin so we could sleep few more hours. It was sooo good. He also bought me an hamburger because I hadn't eaten. After eating it I felt much much better! It was actually so good that we took the cabin because there was a storm in the sea and people weren't allowed to walk around because it was dangerous. The ship was really careening. It was much better to lay on the bed safly in our cabin.
When we arrived in Helsinki in Finland we took a tram to the railway station and then a train to Hyvinkää. The train ride whet quickly because we were talking the whole way. Before going home we decided to go to the foodshop to buy milk and cereals. We also decided to order kebab and fries with salad for dinner. So, I had pretty unhealthy food yesterday, but it's okay since most of the time I avoid junk food.
Oh, one more thing. We got Jay's favorite donuts from the foodshop! He wanted me to try one and I must admit it was veryyyy delicious :):) 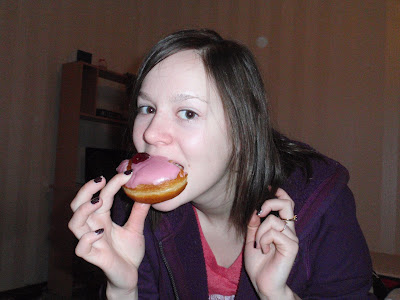 Me eating Jay's favorite Berliner donut!
I am so happy to be with Jay in Finland. We watched about 5 episodes of Modern Family last night. I think this show is hilarious! I love it!!!! It's 11.50am right now and I have 2,5 hours till I go out to walk for Jay's work. He finishes his shift at 3pm. I guess I am going to watch some vlogmaes from youtube now :) ﻿