When I woke up yesterday I decided to go to the shopping center. I wanted to buy a new yarn. Rebecca told me that the yarn is in Finland cheaper than in Estonia. At least the kind of yarn I wanted. So, I went to the CityMarket and I was sooo happy when I saw that the yarn was in sale! It's normal price was 7.89 euros, but now it was only 5 euros. I choose two different yarns. They both are 150g which means you can make two socks with one yarn..and you will probably have some yarn left! I love the yarn I bought because it has different colors in it and the sock you are knitting has different colors and a pattern.
While in the shopping center I also bought a hot chocolate to make it at home. It's a different one because it's already liquid in the package (like a melted chocolate). So, I made that last night and it was good. Maybe I should have put more milk because the chocolate itself was pretty sweet!
I saw quite a few things that I couldn't decided either to buy or not. I decided to go home and ask advice from Jay (that's how I am, really hard of deciding wheather to buy something or not!).
At home I sure started knitting a new sock with my new yarn. It's so fun to knit if they yarn is new and colorful. It doesn't get boring at all! I got the heel done yesterday and today I have been knitting some more. I hope I'll finish the sock today so I can start knitting the second one of the pair tomorrow in the ship on our way to Tallinn.
Anyway, today I actually went back to the shopping center. To buy these few things I saw yesterday. Lol. These weren't anything big nor expensive, but I have hard time deciding even with the small and cheap things. I just don't want to buy things I might not need or use.
But yeah, I ended up buying a salad spinner. Every time I buy salad leaves (or a mix of different leaves) and want to make a salad of them I realize it's so hard to get them dry. I need to wash them before making salad..but I don't want wet salad. So every time I have been making salad of salad leaves I have thought that I need a salad spinner. And I saw it on Anttila yesterday, on sale! Only 5€! Today I bought it :) I also bought two things from Tiger Shop (one of my fav shop). I bought a new traveller mug (such a cute one with mustage!) and a box for sewing tools. It actually has some sewing tools inside of it (needles, scissors, floss ect). From Tiimari I bought a little purple cup for my makeup table. I can put there my brushes, nail file, mascara, eyebrow pencile and other things I am using. The cup I have right now is just too small...
Well, these are the small things I purchased yesterday and today. 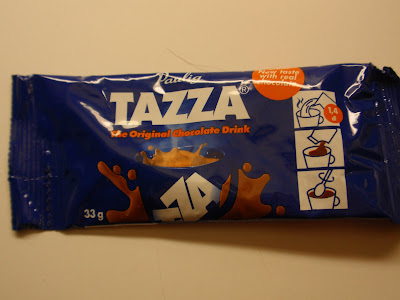 This is the hot chocolate I bought.. 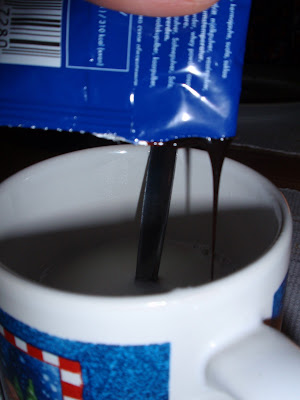 I only had to heat the milk and add this melted chocolate to it.. 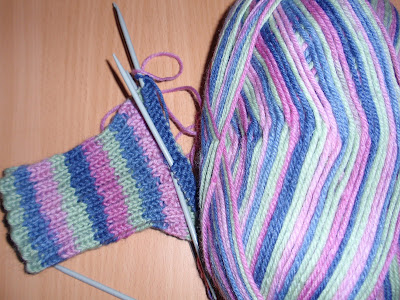 My new yarn and the sock I started knitting yesterday. 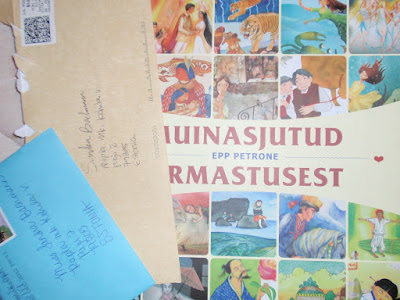 I got mail: two letters from my friends from USA and a book that I got from PetronePrint as a reward of writing a review of one of thier books. 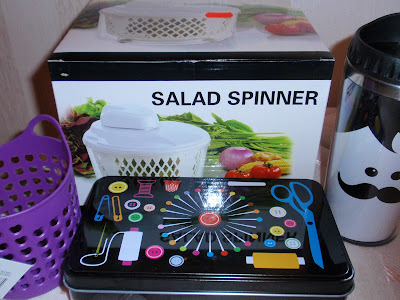 My today's shopping bag..
By the way, the other day when I was the foodshop I bought Mcennedy ice-cream Chocolat Fudge. It's basically the same as my fav Ben&Jerry's ice-cream New York Super Chunk, only Mcennedy's one is exaclty half cheaper. When I bought it I was curious to see if they actually taste the same. So, yesterday night Jay asked me to serve some ice-cream (he bought himself some strawberry ice-cream). As I was eating Mcennedy's ice cream I realized it tastes exactly the same - rich chocolate taste, walnuts, chocolate covered almonds and white chocolate pieces! Appearently this Mcennedy's ice-cream isn't sold in Estonia, but if Finland I am enjoying this cheaper ice-cream with the same rich taste! Here's the photo of this ice-cream:

YUM!
I am off to the kitchen now. It's time to start making the dinner - boiled potatoes and minced meat sauce. Simple but good!
Posted by Sandra at 7:57 AM